Two exceptional testimonials for the #DISLEGGO campaign created by TIM Foundation with xister Reply, on air from 7 to 16 October: Andrea Delogu, AID ambassador, and Francesco Montanari. The two protagonists were involved, as a couple, in the project to offer a broader perspective on DSAs (Specific Learning Disorders) and to raise awareness, with a touch of irony, about the implications and the paths through which to address dyslexia.

To develop the #DISLEGGO campaign let's give Dyslexia a ''different reading" and tell about the TIM Foundation initiatives linked to DSAs, a font was used that simulates the way dyslexics perceive letters. The key visual is constructed in such a way as to make it initially difficult to read the written message, requiring the reader a little effort to recompose the text. To really understand DSAs it is necessary to change perspective. The TIM Foundation thus proposes alternative points of view and does so through widespread messages that reach different targets: teachers, the family, people with DSA, public opinion. 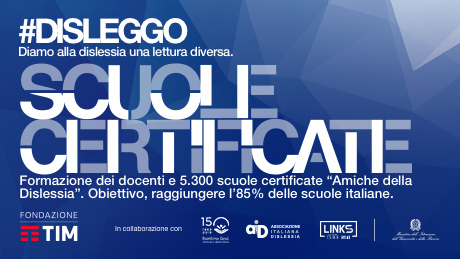